Sonic No-no. Smule get it wrong with iPhone upgrade 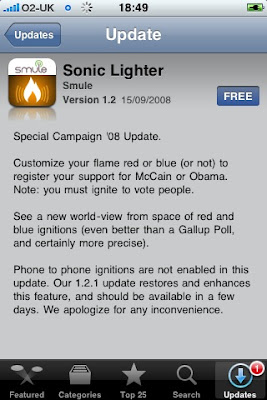 I'm going to add this to the debate over whether iPhone App developers can cope with an international market.

We've already had people had a US only offer hit a global audience and now Smule are messing with functionality in the name of American polictics. The application in question is the superbly popular Sonic Lighter. The 'upgrade' lets you burn either a blue or red flame to show your support for one of the American candidates. I've no desire to bring American politics to my iPhone. I do have a desire not to have a snagging (1) icon in my App Store icon.

Here's the catch. Even if I just take this 'upgrade' and try and ignore the politics - I'm still going to loose out. The 'upgrade' cancels out the ability of your Sonic Lighter to light another iPhone's Sonic Lighter. That, to me, is the best feature of the lighter.

The timing seems naff. We've got SMX London around the corner and I'm looking forward to the chance to light a few search Sonic Lighters. I'll be very annoyed at Smule and politics if this 'upgrade' downgrades my chances of tapping into an international network of flames.

It might be interesting to see whether the App helps predict the election - I suspect Obama voters are more likely to be iPhone savvy than McCain so the coloured flames may have a bias. I'm not interested enough in order to sacrofice functionality though.

Just a few days I go Smule launched Sonic Boom. I thought they'd got the launch exactly right - aggressive but not too aggressive. They tweaked things so that the Sonic Lighter app asked whether you fancied the Sonic Boom or not... and I think that's an extremely effective way to launch the App.
Labels: mobile social

jcs said…
This is an excellent article. You raise several valid points. We're taking your input seriously. We're trying to find the right balance regarding personal expression (e.g. affiliations). And so your input and perspective is helpful to our process.

On the topic of the inability for the 1.2 release to ignite other phones, this is a bug (a complex one involving multi-threads). It was never our intent to disable this feature. We've fixed it in a 1.2.1 update which we submitted on Saturday, and hope to have available soon. We disclosed this issue in our update text and apologized to our users. And I agree with you -- this is a significant feature.

Anonymous said…
it looks like the 1.2.1 release the other day fixed the lighting... I can light firecrackers now with my Blue flame :)
6:28 pm