Whether its Simplyhealth or Simply Health - people may read this first

“Soon to be SimplyHealth” – some people will read this post first before visiting simplyhealth's actual site.

I’m being a little unfair here as I’m illustrating the challenges brands like HSA face as they gear up for a major rebranding.

HSA was/is a health insurance company. They ran adverts on UK TV which featured bunnies and sock puppets with the catch phrase; “Hey! Just say!”. It was a little quirky but I think it worked well – and really appealed to their target demographic.

By May 2009 and early June HSA’s latest set of ads included the message that they would soon be “Simply Health” (or perhaps that’s SimplyHeath). 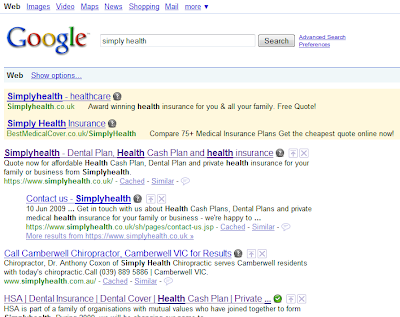 This is a tough move for any brand to pull off. They want to let their customers know they’re changing name, they definitely want their potential customers to know they’re about to change name and ideally they’d like to run ads that bring in leads and boost awareness of the new brand.

The challenge, of course, is that until they become SimplyHealth that all sorts of people on the internet have a good stab at becoming an authority on the newly created keyphrase (especially if it’s SimplyHealth without spaces rather than “Simply Health”) then they do.

Simply Health, that is to HSA and partners, at least have a website up on the best possible domain. It’s not thought that much about SEO as its running entirely on a secure server. They are running PPC ads though – good job.

In fact, we can even see the HSA site ranking for the term. The two sites have aligned their visuals. As a consumer checking out the two websites I don’t suffer any doubt. I’m not confused. They’ve done better than FGH.

Nevertheless; this is an extremely vulnerable time for the brand. Health insurance affiliates, in particular, have every reason to move into the weakened brand space and dig down.

What we’ll see in the future – given the rise of social media and always growing importance of search – is that rebranding becomes even harder than it is today.