The intent is to expand this so that you can use Google Video to search for videos anywhere on the web.

This is what Yahoo Video does already.

Yahoo Video makes use of RSS Enclosures as a way to put across all that extra video information which Yahoo! Slurp can't cope with. It's not Yahoo who sets up the RSS feed with enclosures but the webmaster of the site with the video content.

That tends to be the catch. Most webmasters aren't dab hands at RSS enclosures (though it's pretty easy) and most don't bother. 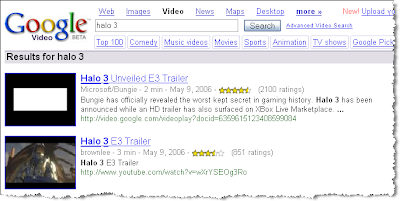 It's doubtful whether Google will push webmasters towards RSS enclosures in the way Yahoo did but if enough webmasters use them - then so will Google.

Video technology is coming on in leaps and bounds. Podzinger is already capable of looking inside podcasts and videos and turning speech into text. There's even a YouTube tab on Podzinger.