Tweet with Eliza Dusku via Dollhouse ads. Shame about the Oauth.

This a rather funky interactive advert from Fox for Joss “God” Wheedon’s Dollhouse series. It invokes video, Twitter and images of Eliza Dusku.

BR, polite as they are, say the ad is running on “male-targeted” and sci-fi sites.

I think the ad’s a great idea. I wouldn’t have gone searching for Eliza on Twitter as I wouldn’t have expected her to be there. What happens here is that the ad will appear on a site I’m reading (that’ll be the sci-fi site) and effectively that brings Eliza to me. It’s all about attention economics.

In the ad itself you can sign into Twitter and send Eliza some tweets. There’s a moderation process (presumably to strip out costume requests) and then the chance of a reply or even your tweet appearing on the ad itself. 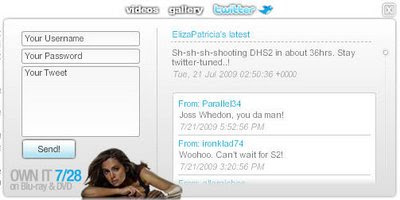 I’d love to use it. I’m a little cautious about plugging my user details into the ad though. It doesn’t use Twitter’s Oauth.

One wrong click and you’ll end up on Amazon.com’s Dollhouse Season One page too. That’s a bit tough if you’re in the UK or elsewhere as you’ll have to flick sites and wait until September the 7th. Hopefully Fox and co will get the geo-targeting sorted out.

Will they simply show the ad to US visitors? Likely. That does mean they won’t be able to harness Dollhouse’s UK fan base and build any sort of buzz for the DVD/Blu-Ray release over here. Sadly, this is what you get with evil regions and staggered releases.

If you want a play with the ad (or an oogle at the vids) then EyeWonder (one of the ad authoring companies involved) have an online demo that works.

Let’s see more of this sort of thing; except with Oauth and with a global concept.