I'm already a big fan of Google Reader's new "Like" social model. It's a model that lets you mark those RSS supplied posts you like. It turns the vast amount of reading I do into a social networking oppertunity.
That's why I'm gutted some of the core methodology appears to be fundamentally flawed.
My main gripe is that the "likes" are attributed to the redirect/tracking URL and not the actual URL of the writing itself. Sounds crazy, but it's true.
For example; here's an original Mashable article and its associated likes. 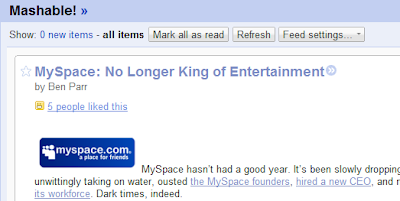 Here's the very same post. There's no likes on it this time. Why not? The RSS feed came in via Yahoo Pipes first. That's the technical reason but if the goal is to show me what's popular then we've failed here. 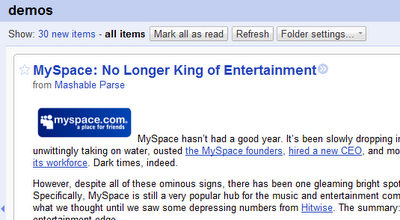 There's a related situation with the mobile version of Google Reader. I love the mobile Google Reader as it doesn't matter where I am - my reads all always in sync (it's the cloud, no actual syncing needed).
I star or share something via my phone or blackberry the effect is the same as if I'd shared it via my desktop. That's not the case for the 'like' feature. I know it's new and it may be demanding to expect Google to keep their mobile web apps as update to date with their web apps but already I'm hesitant to scroll through my RSS on my blackberry today as I may loose out on the chance of marketing a discovery as a 'like' and therefore loose out on the social networking chance.
Labels: google reader mobile social rss social media