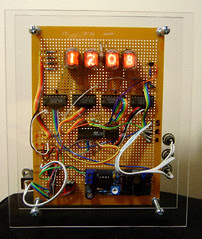 This is the second time I've found myself trying to guess a Google logo. A so-called "super digg" is when Google's logo changes to mark and event or date, links through to the search results and you're lucky enough be among the ranking sites.

The last time I (correctly, briefly) predicted a 1234567890 Google logo was to match the unix clock.

This time the prediction is based on the 'British calendar'. Here in Blighty we tend to write dates differently than in the US. We put the shortest of the chronological elements in order and so it is: day / month / year. I was born in 10/5/76. I was born on May the 10th and not the 5th of October.

Chef Kate tells me that this won't happen again for another four thousand years! (I'll do the maths on that later, promise).

So will Google UK's logo change to mark the second? Maybe. I'll be an optimist and give it 23.45% chance of it happening!