The Daily Show: Geo-tarding with humour

Are you familiar with the expression "geo-tarding". It comes from "geo-targeting" and expresses the world's annoyance with poorly geo-targeted videos and other content.

One big reason for geo-tarding is global licensing deals. It's sometimes the case that media platform X has the rights to show and advertise a program in one terrirority, wants to release some videos to promote it but doesn't have the rights to show the program in another territory and so geo-tards.

Here's an example, the new Torchwood series (a Doctor Who spin-off) is a team effort between US' Starz and the UK's BBC. This trailer looks like it might be a kick off for a mini viral campaign for the show.

Except, you can't watch it in the UK. I'm told the video asks us to search for [Esther Drummond]. The current top position (for me) is this IMDB link. Also in the top results I get this video link. The geo-tarding is pointless.

One of my favourite TV shows suffers from geo-tarding problems. Here in the UK we don't get to watch all of Jon Stewart's The Daily Show. The licensing structure means that all officials go out with geo-tarding.

Does this mean that The Daily Show is satisfied with the poor user experience? Do we find ourselves kicking on video buttons only to find blank screens appearing? No. We get this: 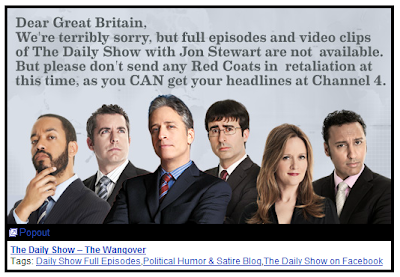