You’re all aware of what happened to the music and film industries. The internet made is easy to copy and share entertainment - and so people did just that. In fact, you could argue that the internet made it desirable to copy and share entertainment. The gaming business as had it easier because many modern games are at the best once you’ve connected to a central hub and are playing with friends – and the game publishers retain control of those hubs and authorise only valid games.

What if this "easy to copy and share" revolution stretched outside of music and films? What if it came to actual physical goods? Would that change retailing and ecommerce as we know it? I think it could.

3D printing may well be one of the steps in the next phase of retail revolution. If you’re not at all familiar with 3D printing then it’s quickly summed up as machines that are capable of printing out objects, with height, width and depth, from plans sent to them over the internet or from a connected machine. This is not new tech. Here’s an introductory video from 2007.

3D printing has moved on in leaps and bounds recently. We're not restricted to simple shapes. This next video shows how “Strandbeests” can be created via 3D printing too. In this context Strandbeets are best thought of as fairly complex machines with movable parts.

Recently, 3D printing has been in the news for its retail innovation. Shapeways are selling the first bikini created by 3D printing. If we go back just a few weeks and visit The Register’s Hardware site then we’ll find complex devices such as bicycles or fashion items like these shoes that have been produced in a 3D printer. 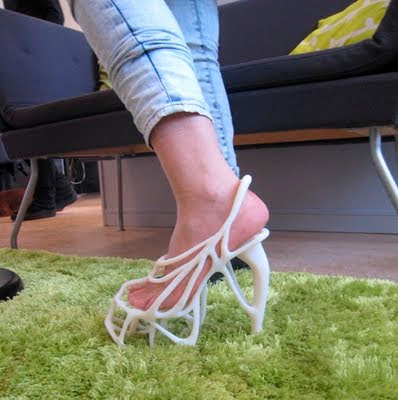 Fashion is the second step. I think more mundane items will be the first wave of the 3D printing revolution. Kitchen items such as cutlery, cups, plates, bowls and even containers are all easy to 3D print.

To the best of my knowledge, no one has the copyright or trademark on the design of a spoon. Once it becomes cheaper or more convenient to 3D print a spoon then there will be a trade in the 3D printer instructions for spoons. A trivial example, I know, but possibly an accurate one.

If households do gain the ability to cheaply and easily manufacture items based on readily available schematics from the internet then I really do believe we’ll enter the next evolution of online retailing. 3D printing is certainly an area to watch.
Labels: 3d printing legal retail