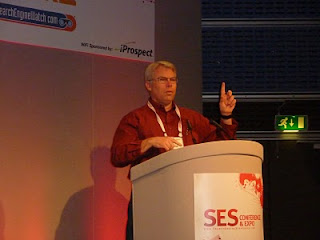 My last day of live blogging at Search Engine Strategies 2011 here in London. I'm speaking later today. First thing in the morning and I'm in the main room for "Video Search Optimisation". It's a busy panel with Sean Hargrave as the moderator, Paul Carff of Google (he would be a good person to interview!), Will Critchlow of Distilled and Jonathan Allen of SearchEngineWatch as the speakers.

I must admit that I feel this session has something to address. What on Earth do we mean by "Video Search Optimisation"? I think the term has become overloaded and confused. That messes with client expectations and that's a bad thing. I wonder if we'll touch on this today or whether we'll dive into tips.

Google's up first. I expect we'll be talking about video sitemaps. Paul's had some volcano issues.

53% of people took action as result of watching a video online.

Google wants to create a large video index. Webmasters can help by using the Google Video Sitemap. Paul suggests that SEO comes into play when writing the title and description for videos in the XML file. Recommended but not necessary are duration, expiration date, publication date and restriction relationship which is a geo-restriction.

It can take a couple of days for Google to process all the videos in a sitemap. This is a big improvement on before.

Paul announces http://code.google.com/p/video-sitemap-drupal. It's version 1.0.0 and Google are eager for feedback. There will be Joomla one soon.

Are we done with that? Hope. Paul reminds us there's more than search. We cut to a video about a tongue cleaning product. The message of the video - YouTube is the great leveller. It lets SMEs compete with giant international companies when it comes to some forms of advertising.

Back to Paul and the highlight that video is better for discovery than search. Related videos are a good space and you can now buy promoted videos to appear here too. With "True View" you can ensure that you only pay when people watch enough of your video.

Creative content is always the big winner. Think about what will interest your desired audience.

More than 50% of all videos have been rated or commented on.

With the launch of Google TV and others the role of TV is becoming more central for online video. YouTube have launched Lean Back to make the large screen experience as good as possible.

One strong reason to do video is to get into the SERPs for key terms. Videos in the SERPs can link back to your site.

In addition to sitemaps there are video microformats; the Yahoo Search Monkey one and the Facebook one.

Another tip is to publish a transcript of your video. It's a good use of text and will help you to rank. Speechpad is a cheap and effective way to achieve this.

Will recommends tools in addition to YouTube. One such tool is Vzaar. Wistia is another and it makes analytics much easier than working with YouTube.

Another tip is to provide a textarea box with your own embed code in it. In this code include a link back to the page that hosts the video. One thing to watch/exploit is that the subscribe to channel link is automatic without confirmation.

WIll promotes Unruly Media as a good way to get your videos out there. It'll be a good day for them in Search Engine Strategies as I'll be mentioning them too.

Jonathan has stared as Bilbo Baggins. Well. At a school play. We'll be looking at mid and high budget video tactics.

Whether this was planned or not - we're now quoting Guillermo del Toro who sees video as a story engine.

In production values let's look at UGC, cheap or semi-professional - thus leaving "Broadcast" or TV quality out of scope. A word of caution on cheap videos; they look cheap. Jonathan thinks it's therefore better to do UGC better.

No budget at all? Xtranormal and Moviestorm are two sites that will let you create video from simple text scripts.

If you have photos then Animoto will put them together, to a soundtrack, and create a video. A tip from Jonathan is to use this to create intros

Create a video by submitting your sitemaps to Treepodia.

Tips for getting for extra traffic.
- Upload all the videos you get. Google will sort out the copyright issues for you. It'll either be automatically be blocked or you'll get the benefit for it.
- Report on events; get those voxpops and shoot crazy stuff.
- Keyword rich titles on YouTube, target known search queries, copy other people's tags and tag people on Facebook.

Eww. We've a video of Jonathan eating a live octopus. Let's hope he doesn't play it. As it turns out "Eating live octopus" is second in Google's search suggestion on [eating l]. In fact, "eating live [anything]" is pretty popular!

Link videos together as a playlist. This works as well as it also makes sense to cut longer videos down into smaller chunks.

A way to make a cheap video look less cheap - try and frame the the subject, try and get eye level at about 2/3rds towards the top of the screen, pick a nice background and add some "pick up shots" to spice things up.

Moving on to professional content... branded content is increasingly popular. If your brand doesn't lend itself well to video you can still come up with interesting twists. For example, Diesel Fragrance Factory have a "Flute Boxing" video. Diesel's had their video chunks turned into a TV episode.

A final tip is to pay video influencers to do branded product placements. Let their own production values come through and don't try and control these placements.