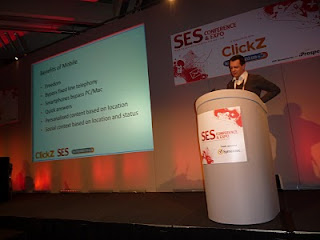 My last live blogging session of the day from Search Engine Strategies. Search Engine Watch's Director Jonathan Allen is moderating and we've got Howard Ogden from Mobilistar and Mark Lister the MD of Imano as presentors.

Layar has had a $14m investment from Intel. The major research companies are predicting big things for AR. THey're calling it disruptive and the new mass medium.

AR is a revolution in vision, a new interface for reality and a window to the data age - a lot envaglism for Augmented Reality from Howard. He's keen to suggest that AR isn't a piece of technology.

He disagrees with Gartner in that it'll take five or so years for this to become mass. It'll take less time.

Where did it begin? The start was 1D barcodes, to QR codes and then to 2D marker based AR. We're beyond that now.

He holds out Word Lens as an example of AR available today that's simply mindblowing.

There's Google Goggles - possibly the most famous AR tool. Howard says it'll be very big. He managed to speak to Larry Page about AR. Howard predicts that Goggles will be key to Google's location based advertising AR options. After all, they already have Street View that maps the world. They could augment building faces with data. They've the Android platform in place to let them do this en mass. He predicts that Goggles will be built into the browser - no need to download the App.

.. but there's a catch with his research technique. We're finding the homes of large mobile maketers and the large AR platform providers.

Phone mobiles are almost people like with their sensor abilities now.

We're heading to a future that will have contact lenses that augments your vision with data. They have the technology now.

The singularity is coming. Time predicts 2045 is the year we become immortal through technology.

Both Google and Apple have bought technology that specialises in facial recognitional.

Google use the phrase "the bar of daily engagement". Howard admits that AR isn't there yet. What will that take?
- Useful AR
- Glasses
- Gaming
- B2B
- Social
- Government
- (others)

Mobile app development is the real growth behind the digital agency Imano, says the MD. Recent changes in client demand is a move away from simple brand and towards utility apps.

Smartphone + Tablets > PC shipments, says Morgan Stanley Research. By 2013 the mobile hardware greatly outstrips the desktop stuff. A lot of the growth in this area comes from BRICS. Smartphone growth in those geographies are picking up.

Hyperlocal marketing is coming. For example, a bagel shop might be able to advertise to people within 100 metres. A far better idea than printing off tens of thousands of flyers to hand out at Tube Stations.

Mark illustrates with some client examples. One theme is the merger of social into AR.

The Takeaways
- Mobile growth is unstoppable
- Growth of apps continues - for now
- AR is a powerful tool for mobile use
- Not just fun and gaming. Use for security, health, payments, leisure and automotive.