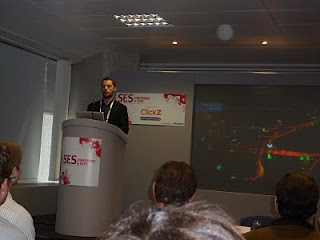 Mindshare is a media agency, he says, so they're all about buying ad space and then working out the best places to run the ads based on the audience. We're going look at the data.

The average individual in the UK passes 3,254 pieces of personal information into databases every week. We'll have to be careful of that as individuals but also marketers as Ciaran wants to avoid a slapdown by the EU regulators. That's my expression, not his.

In the early days targeting was straight forward. If you wanted to target parents then you'd do something like buy a print ad in Parenting magazine.

Now we've got more data. We can see the type of user who match a profile. Facebook builds up profiles of people who we can then target - but can we do something similar with Display? Yes we can - There's Google's "Similar People" product coming up that lets you target ads at people who are similar to the profiles you want to target.

If you can cookie people (unless the EU rules against it) then yuou can start to study and track people. You can look at where people click, as WPP (Mindshare's owners) does, you can look at the pages the people visit once they visit your site and you at the keywords used in the search. Together that lets you build up a picture of that person. This means you don't have to place you ads by context - often at a high cost - you can now buy cheap remrant inventory and target by intent. It doens't matter that the content isn't right. The audience is right.

What's more - this can happen in real time and on the auction model. This is a much cleverer form of targeting.

Facebook has essentially created the universal login in the West. This allows Facebook to build up a mass of data. They've an incredible content platform that you can adverse on. Ciaran speculates whether the social graph would be turned into a social network. This would personalise the advertising experience, increase the chances of success and even havea situation where people like ads. He mentions "Sponsored Stories", the latest Facebook test, which essentially turns actions into adverts.

Okay! Good stuff! That's my favourite presentation of the week.

We'll be looking at the change in the PPC landscape, more recent ad formats, the importance of creativity and the mindset required for success.

Up until about 2009 the PPC landscape was pretty easy, says Tom. Then Google seemed to decide to release a host of changes. We're now at a spaghetti junction. There's simply not enough time to go through all the new changes to ad formats, adwords' development changes and all the rest. Let's pick a few.

Ad Sitelinks. These can improve CTR by over 30%, claim Google. Tom points out just how much screen the the Ad Sitelinks takes up. He agrees with Google (doesn't happen over). Ad Sitelinks are good, they're easy to use and the results are good. The improvements go beyond CTR. iCrossing have seen up to 20% increases in revenue and ROI after deploying sitelinks. You get an extra 140 characters - a tweet - for free to sell your proposition when you rollout sitelinks.

Tom spends a few minutes running through some client examples.

Has Google Merchant Center and Google Places become core? Yes, argues Tom. They allow you to take advantage of Google's ad extensions; pictures of products or maps in the paid search ads. If you've a lot of locations or SKUs then the best way to tackle this is through an XML feed.

With XML feeds you can dynamically work with your inventory and avoid bidding on out of stock items. The same XML feed can be adapted and rolled out to the price comparison engines.

Where iCrossing have seen multi-click conversions, where CSE are enabled, in up to 75% of cases there's been at least one click on one of the price comparison engines.

Be credible, argues Tom, make use of the seller ratings on Google and get those stars beside your brand in PPC ads. You're riding on the back of Google's own credibility.

All this is well and good but the right mindset is essential. Otherwise you go nowhere. Tom points out that there's a bit of paradox. In some ways PPC encourages you to be formulate but we need to be creative.

As an example, Tom cuts to a video case study. It had cheesy music.

Tom says it's simple; if you don't align your marketing strategy with your PPC then you'll fail. For example, you need to have a very clear business reason why you'd advertise low/no profit items.

Are CPCs too high... or is Paid Search the scapegoat? Tom urges the audience to pause and think before switching off Paid Search. Across many sectors Paid Search works very well. Don't switch off, pause and re-evaluate your proposition. A back to basics approach is sometimes necessary.

In summary, Tom urges us to keep pace with developments, be flexible, build a business case and work on having the right mindset.
Disclaimer: this is a live blog and therefore poorly structured, full of typos, errors and gnomes.