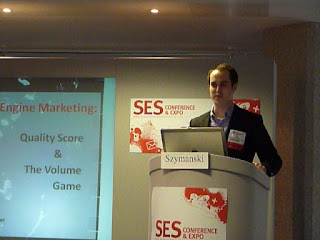 My first session at the 2011 Search Engine Watch London is the Music & Search Engine Marketing: Quality Score & The Volume Game. This is an attempt at live blogging so apologies in advance for typos of terror and mistakes of doom.

Paul Szymanski is the guest speaker for this slot. He has the entire presentation to himself. It's his first time in London - which reminds me that SES still has the ability to attract big brands. Paul Szymanski is the Search Engine Marketing Manager at Sony Music Entertainment.

There are 14 different labels within Sony Music Entertainment. These labels run lots of different types of campaigns, including brand, but today we're focusing on Direct to Consumer (DtC) and on revenue.

The main challenges? Quality Score and Volume. There's a pun there. I like that.

Paul brings up a reminder of what Quality Score is composed from; including the infamous "other". It's a basic slide but I think I see where he's going with it...

He points out that the aspect that SOny can control is the quality of the build. A good and relevant site should be enough for a good QS? Right? Not so much. Paul explains that new campaigns often begin with a QS of 3 rather than the 7 to 9 they'd expect. He suggests that this is Google's initial reaction to music and entertainment campaigns.

In this situation Sony's CPCs will rise. In order to try push through the low QS the tendency is to bid higher and this, of course, pushes bid prices up. In fact, the First Page Big Estimates usually suggests a x3 or x10 increase - even if there's no competition.

Who tends to be Sony's competitors in this space? Amazon and iTunes.

Sony decided to test different domains in order to see what the effect it has on QS. Sadly, Paul's had to obscure the name of the artists used in the test. I'm going to try and guess for the purposes of this live blog - so that's a caveat. Artist names are my own suggestions and not a leak from Sony!

Paul reminds the audience they need to test for themselves. He should be given an award badge for that. It's perhaps the most important rule in PPC.

The next biggest issue is volume. Sony want endless volume; as much as possible to drive towards conversions. Sony certainly want enough volume to analyse. However, the majority of Sony's DtC campaigns suffer from "extremely limited volume" and the purchase funnel is non-existent. The majority of conversions come from extremely generic terms like [pop music].

There's a catch, of course, some of the very popular artists have large volume around their names... but the conversion rates are about the same compared to the emerging artists.

The two challenges combine together. The poor Quality Scores push impression share down in a landscape that already struggles for volume.

The logical step is to move away from standard search - looking at other CPC options and perhaps some CPM offerings as well.

The email lists tend to work well - but that makes sense. These are the fans who've signed up to hear what their favourite artists are up to. This carries across to email list rental (for example, taking the list from a concert ticket provider) but the in-house lists are best. Volume is still an issue.

In-Text advertising tends to be twice as expensive on the CPC than search for Sony. The volume is still too limited but the ad units are adaptable. Paul recommends this as something best suited to brand buys.

How well does Facebook work for Sony Music? Finally enough volume - well, enough impression volume that can be bought on CPC.

Banner buys tend to be done by each of the individual labels - why? Seen as a branded media buy. Networks tend to be very pricy. Low clicks, low conversions and perhaps better for branded. I wonder if Paul's tried buying via ad exchanges and DSPs.

What about video? Even Sony Music find videos can sometimes be difficult to produce. YouTube might seem obvious but the ads point internally.

Google Content offers a low CTR for Sony but does bring a significant impression and click volume. I get the impression that Google Content therefore beats the Network Banner buys. Retargeting makes it even better but volume becomes a real challenge again and initial tests haven't been as successful as Paul had hoped.

So, what can you do? What does Sony do?

Paul reminds us to test, test and test again. Run broad and check search query reports - he's looking for new golden keywords there. Modified broad hasn't hit Sony too hard and because volume is so low negative keywords aren't that much of an issue either.

Internally, he recommends its best practise to manage expectations. Some offers with flop. Don't promise to support low price point products. I sense this latter one is an internal battle Paul has fought more than once!

This session is running at the same time as Yahoo's and Bing's Search Alliance session; however, Paul's on theme as he also recommends search marketers in a similar landscape explore Bing. Sony Music Entertainment has found that against some terms the conversion rates are much higher on Bing.

Someone in the audience has noticed similar and asks Paul whether he has an opinion as to why Bing converts better. Paul isn't sure. He hedges the user base is different - perhaps searchers are less aware they're clicking on ads. Someone else in the audience suggests that Google users include more navigational searches but admits this is something of a wild guess.