Here in the UK the two biggest cable channels merged. NTL and Telewest became, briefly, NTL:Telewest. Add on Virgin Mobile (where Virgin is the franchise you associated with Richard Branson) and the company becomes Virgin Media.

Is there anyone who can compete against such an empire? Yes. Easily. Paid TV is dominated by BSkyB (typically known as Sky) - a satellite based network with huge subscription models and some of the most popular channels. Sky One is the channel which typically picks up the biggest and "best" from America, for example. Sky News goes head to head with the BBC's News 24.

When it looked likely that Virgin Media might try and take control of ITV it was Sky who moved to block them.

Virgin Media runs Sky One, Sky News, and other Sky owned channels on their cable network. In fact, one of the main reasons for signing up to Virgin Media TV is to watch Sky One.

Sky's reacting to the growing threat from Virgin Media and reports suggest things have come to a head. Sky hiked the prices of these channels - the amount Virgin Media have to pay to display them. Virgin Media's not happy and isn't playing ball.

Arif Durrani at mad.co.uk has a great quote.

"Sky's behaviour is a heavy handed and anti-competitive response to that challenge and consumer choice has been reduced as a result. I'm pleased, however, that at a time when they're taking content away, Virgin Media is giving people more."
- Steve Burch, CEO of Virgin Media


Virgin Media's launch had seemed to be doing well. They're running a very aggressive TV campaign with Uma Thurman. Let's take a peak at their Alexa (last week they ranked up there as a top Mover and Shaker). 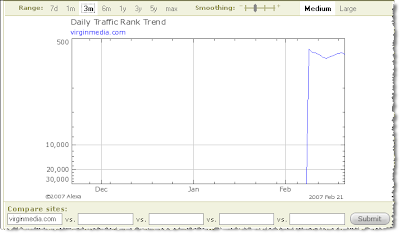 The Virgin Media site itself is a nice big portal. I'm sure it's doing well with all that traffic. However, I'd like to be able to include a YouTube of the Uma Thurman adverts - but they don't seem to be online. Whoops.

(p.s. Google's lawyers will be displeased with my use of YouTube as a verb)
Labels: branding tv youtube

Anonymous said…
I was on the ball for this one ;)
http://www.viperchill.com/blog/virgin-hit-marketing-success/