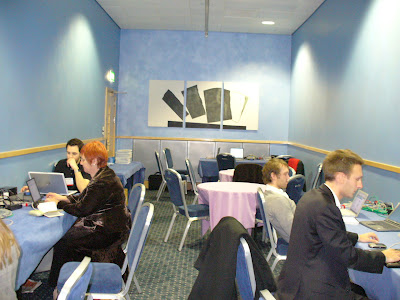 This isn't a live update from the first day of Search Engines Strategies - London 2007 because we struggled with the wifi and because I'm no good at grabbing the precious RJ45 cables in the Speakers' Room.

The photo shows the Speakers' Room. That's Rand Fishkin on the left. The woman with the lovely red hair asked that I didn't spell her name wrong. No spelling errors here.

I had high hopes for SES London this year after being disappointed with it last year. They have new owners (Apax) and a new venue ExCel. ExCel has character but it's miles (and miles (and miles)) from everywhere else in London.

The Expo is very small. Google doesn't have a booth. Yahoo doesn't have a booth. There isn't a single gambling site looking for affiliates. MSN is a big sponsor. Unlike last year, however, the Expo is in a smaller area (much) and so seems much busier. This is an improvement of sorts. I would find it hard to advise any SEM agency to take a booth to SES London at the current rate - however, if you're pitching web analytics or technology that a SEM might use then you might have an audience.

The presentations and forums are better; much fuller than I recall from last year but that's perhaps due to different topics and verticals. I heard some people grumble that SES is suffering from having the same speakers again and again - but, hey, there's a reason why they invite the same people back.

The highlight for me this year (so far) is the same as it was last year. I think Chris Sherman is a great moderator. He manages to direct the forum with a gentle touch, keep things timely, at the right pace, keep the conversation on topic but still diverse.

Its very easy to waffle or forget the initial question when you're on a panel. That shows. I do worry that sometimes people pick up the wrong end of the "advice stick" at SES. You have to remember that experts are giving their opinion based on a few seconds of briefing and often without a look at the site in question!

I'm full of opinions and so am likely to disagree with points. For example, I don't think a sitemap XML will allow Google to track people around your site. Last year that's what nearly a whole panel said. This year a lot of people still distrust the service.

It was really great to see Rand Fishkin and Google's Vanessa Fox at the show. New faces and new blood for London. I thought Rand did very well on the Organic Search panel as he didn't waffle and kept his advise consistent. Just spotting Vanessa in the audience will (and did) cause a speaker to change direction in mid speech and end up recommending something they had began to attack!

I have to be in the centre of London tomorrow but hope to have time to catch Matt Cutts' keynote address.
Labels: rand fishkin search engine strategies