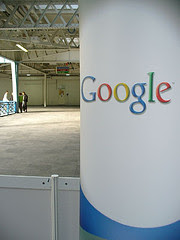 I went to the Technology for Marketing Awards and Expo on the 6th. My first comment is that having the Awards Dinner clearly makes a big impact. This was the first time TFM had had Awards (with Marcus Brigstocke as compere) and as a result the Expo seemed to be busier. I think this was the 7th Expo. I've chosen to headline with the Google stand juxtaposed with the empty second level of the Olympia just because it was a better photo. A small collection of pictures can be found on our company Flickr account.

Google out in the cold? Not really. They had the otherwise empty upstairs area to themselves because it put their collection of stalls next to the Google surgery. As usual I heard the same comments about the surgery - a lot of interest and then some (not everyone) complaining that it was too much of an "AdWords sales pitch". The problem is in expectation. I don't expect Google to reveal the secrets of their algorithm in a public surgery. Some people, sadly, turn up expecting Google to get their site to number #1.

I had my own little speaking slot in TFM alongside Fabio from Rackspace. It was a case study so we had to include some results but, of course, no numbers that would give away inappropriately large amounts of Rackspace data. I tried to assume that the audience had some basic understanding and talked more about the importance of planning and expectation management. I also used the quote from Google's own guidelines to remind the audience that ethical agencies report spam when they find it. It's a quote that tends to discourage people from walking the black hatted path.

Next up is Search Engine Strategies London. I'm hoping it'll be better than last year. I think the new owners, Apax, will up the ante and put more cash in. Incisive seemed to struggle with the conferences.
Labels: events search engine strategies