I hope this is a rumour that turns out not to be true but MediaWeek are reporting Microsoft are looking to shutter Massive Inc.

I'm a gamer and a digital marketer. It's easy for me to see why in-game ads not only work but are totally cool. Back in 2006, when Microsoft bought Massive, everthing seemed to be going really well. The company was worth about $300 million and had loads of oppertunties lined up.

In fact, just this month Hasbro UK started a campaign with Massive Inc to promote NERF guns in games like Splinter Cell.

As it happens Microsoft may have turned out to be their own competitor in this space. It's far easier to get going with simple banner like ads in the Xbox Live interface and you can be sure of the context in which gamers see them. Advertisers tend to prefer this.

In addition Xbox Live ad revenue doesn't need to be split between Microsoft and the game publishers.

I don't think this news is good for the game publishers though. Whereas they can still broker bespoke in-game deals themselves - even if they're static product placement-like ads - sure it makes sense that if a game features a billboard (a racing game were the cars zoom past ads just as they do in real life (making the game realistic)) to hook that billboard up to an ad marketplace and see who'll pay you the most for it. 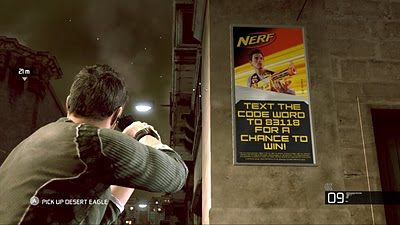