Is there anything there? Calvin Klein's QR code bravery - and challenge

I really do think that last year was the year of the mobile - at least in the UK. It was just a soft pop rather than big bang. Last year, most people become happy with smartphones.
This year is the year people will stop blaming their mobile for a bad experience of a brand's website or mobile app and start blaming the brand.
Despite that and despite the steady progress w
e're making in mobile - it's still early days yet. For example, there's still a debate as to whether QR codes will really take off in the West. I think they well.
Over at Mashable the always-good-to-read Lauren Indvik has posted this crystal clear picture of a new billboard by Calvin Klein. This time it's not a racy picture to set minds wandering and bloggers blogging. This time it's a QR code. 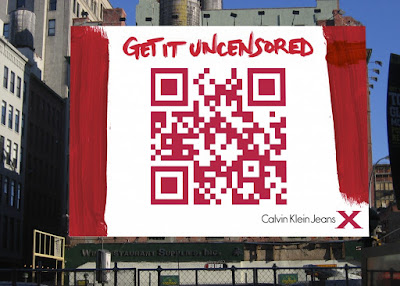 I think this is really clever. We'll see more billboards with QR codes on them (if I have my way anyway; listen to me clients, listen to me! :) ).
There is a problem though. This doesn't work.
You can scan that picture yourself. If you're lucky you'll get to a 40 second video advert with model-people-types Lara Stone, “A.J.,” Sid Ellisdon, Grayson Vaughan and Eric Anderson in it.
If you're like me then you'll make your way to ckj.mobi/pr/ and a blank screen.
I like how they've called it /pr/. Makes me think this may be a PR stunt.
It's not as if I'm using low tech. I've an HTC Desire (that's Android 2.1). I used Google Goggles (latest) to scan the image.
It's just that the video doesn't run.
If Calvin Klein hadn't reached for the video and had gone with just a "mobile poster" then I'm sure it would have worked.
I don't think CK have done anything wrong here. It's just the challenge we face. There's a huge amount of fragmentation within the mobile space (especially people like Android and RIM) in a way that we never ever got to in the bad day of browsers.
What do you think?
Update: Some time later, a lot later, a video still appeared. It won't play. But a better experience and more likely to have me blame my phone.