This is one part clever and two parts risky. It might even be one part luck.

Rightnow, Lynx are promoting a new shower product called Lynx Rise. The angle is that it'll help your brain wake up in the morning. It's also a Lynx product so they're making sure the ads ooze sex appeal which is why famous names like Jessica Jane Clement are being used. Okay, I only found out her name was Jessica Jane Clement for this post... but let's move on from that.

I'm a geek. A gaming geek. My favourite type of game is the RPG. So it comes as no surprise to discover that I'm playing Wizards of the Coast's famous D&D Tiny Adventures on Facebook. Roleplaying games in chapters.

Check out the bum advert. It does catch the attention. I'm a little surprised Facebook approved it. Not much. Just a little.

If you're curious, the add then goes to www.facebook.com/lynxeffectuk. 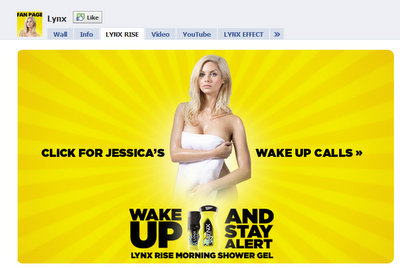 So, other than grabbing male attention with bums and suspenders - how is this clever?

It's a simple case of interest based targeting. The Lynx ad the bum photograph is taken from is a roleplaying joke (not that you get to enjoy that if you click on the bum). So it's clever in so far its targeting gamers. It's not clever in so far as gamers (who've not seen the ad) won't actually get the joke.

As it happens I've got the ad to show below (via Unruly Media; a pay-to-play video ad company).