I'm getting a lot of emails about this and – at least in those emails – the focus is wrong. What people are pointing out (as if I hadn't noticed) is that Google's now automatically correcting [search engine optimisation] as [search engine optimization] when you try and search for the former. Yeah; and it's just on Google.co.uk

This is not a ranking issue for me. It's about language. 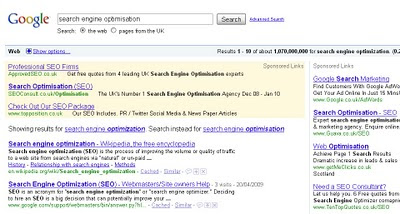 It's a bit fuzzy as there are a number of nuances to look at. First, as BelfastBoy pointed out to me, the word “optimize” is a perfectly valid English spelling. It's just usually spelt with an s. Whereas I don't like attempts (accidental or otherwise) to Americanise the British version of English I think we need to accept there are shades of gray.

It's also notable that there are hardly any other examples of Google “correcting” the English spelling like this. 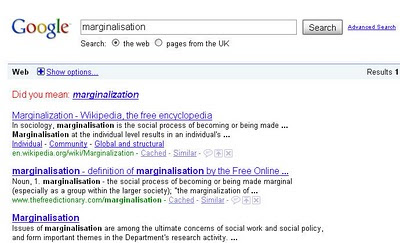 I think that's also why people keep pinging me with the news. The digital agency I work for has had good rankings, in Google.co.uk, for the phrase [search engine optimisation] for many years now. While it's a good vanity phrase and I know a business developer or two like to had a screenshot in some of their presentations – it's purely a vanity phrase.

Many years ago the phrase changed intent. Once it was a research phrase. People actually went to the search engines to find out what search engine optimisation was all about it and to research it. The intent is different. Now, in my opinion, it's more of a commodity purchase phrase most often used by SMEs to begin a purchase cycle.

I would imagine [search engine optimisation] (I think [seo] would be better) and a geographic location would be a strong match.

The big blue chips that I'm lucky enough to work with don't begin their RFP process by hitting Google with a [search engine optimisation] query. That's nonsense. Many of these big blue chips have experience of SEO already.