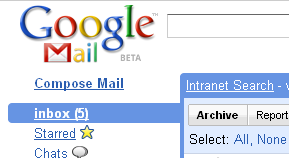 Two days ago my Gmail (called Google Mail in the UK) changed from having the word 'Inbox' in the left hand-side navigation to the word 'inbox'.

The uppercase I became a lower case i.

This tweak hasn't just effected myself. A quick tweet reveals that many others have the lowercase inbox i while others remain on the capital letter.

This doesn't break Gmail. It's a trivial issue - but it does look odd. Some have suggested it's an obscure April Fools joke. Others have said the smaller i is a deliberate interface test or roll out.

I have a sneaky suspicion its an obscure and small human error. It may be related to Gmail Labs (I, for example, put the inbox at the front of the title tag via a labs tweak) or it may be an even more obscure load balancing/geographic roll out issue.

I think it looks naff - especially with the other options with capital letters. What do you think?

Update: The most common theory (not tested it myself) is that by switching your language from EN-GB to EN-US in your Gmail (Google Mail) settings you can get rid of the annoying small i.
Labels: gmail