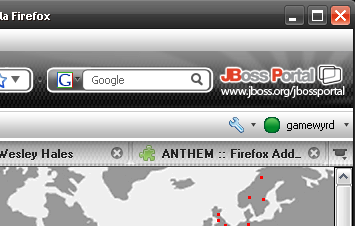 One of my favourite Firefox themes updated this morning. This brings Anthem up to v1.5.

I like Anthem because it's a dark and a compact theme in which it is still possible to read text. If anyone has any similar recommendations then now's the time.

While Firefox is the active window I now have an advert for Jboss in the top right corncer of my screen. Sadly, that puts me off the theme.

Anthem is developped by Wesley Hales . I thank him for all the effort he has put in the theme - of course, I've not paid him a penny.

Jboss? This isn't an advert Hales as sold out to. No. Hales is the lead JBoss Portal UI Engineer at JBoss (which is a division of Red Hat). In effect, Hales is simply giving his job a plug.

That makes it tough for me to be critical about adding the advert. I do suspect that I won't be the only one to leave the theme behind, though. I do know that Firefox community members won't be used to adverts either. Lastly, this is a laptop, it and the Firefox on it travels with me and I don't see myself doing a presentation while running an advert in the corner.

I will admit to a quirk. I'm writing this post just after the Anthem 'upgrade'. It is apparent then the advert vanishes from view when Firefox isn't the active window. I hope this suggests the advert will go in time. I'm not going to wait for it though.
Labels: browsers