FriendFeed has more to do before it is 'international'

I find myself checking FriendFeed less and less these days. Why? I use Twhirl for Twitter and for Friendfeed and the extra window that produces is a real pain. I think Friendfeed would benefit from a tabbed Twhirl!

I also have more language issues with FriendFeed. It took a Mashable post to point out that FriendFeed has expanded into more languages today. I think FriendFeed needs to do more than just translate the interface in order to sell itself as international though.

What I want from FriendFeed is a way to filter by language. The screen grab below shows some Twitter chat from Germany. Some of it is in English and some in German. I'm rubbish at languages so struggle (0.00% success rate) with German. FriendFeed would be so much more useful for me if it let me keep the English and filter the German language stuff. 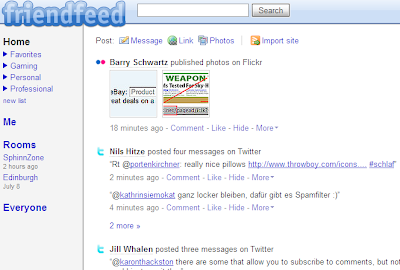 While we're here... I think an auto-update of Twitter followers to FriendFeed would be handy!
Labels: social media social search