Using IFTTT to cope with @breakingnewsuk

This is Breaking News' first international expansion. The local (London) team are @Journodave (Dave Wyllie) and @TomMcArthur (Tom McArthur). They will both trebble their Twitter followers in 3, 2, 1 ...

Interestingly, Breaking News UK has launched in partnership with MSN and you can see the BreakingNews.com scrollbox on their UK site.

This gives me a challenge. I'm addicted to news. I follow too many people on Twitter to be sure to get the BreakingNewsUK tweets at the speed I would need to get the news while it was still super hot and Twitter breaking.

Should I set up SMS alerts? Each Tweet the account gives - I could get an SMS. I wouldn't miss much then. Only Edinburgh Airport has that relationship with me so far. A glance at BreakingNewsUK makes it clear that SMS is not the way forward. It's too active. My phone would buzz too often.

I turned to IFTTT. I love that site. If that happens then this. A rule based response to the internet.

I've created a rule that feeds each tweet from BreakingNewsUK to me via a Google Talk message. 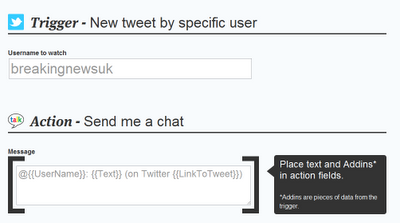 The output of that rule depends on whether I'm looking at Gmail or Google+ or not. If I have a tab open with one of those two then I'll get an alert message. 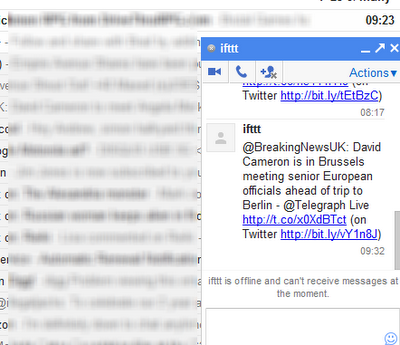 If they're offline then I'll get an email summary.

So, okay, I'm not geting the breaking news at Twitter speed all the time - just when I'm ready for it. Let's see how the experiement goes!
Labels: ifttt twitter