Dear Google, thanks for your concern but Russia is not in Europe

They've blogged about it.

They've blogged about it in their Europe Policy blog. I get the fact that Europe cares (a lot) about what Russia does (or doesn't do). Russia isn't in Europe though.

My feeling is that Google didn't think the American readership/world would care enough about the Russian internet woes to do a company blog post but still wanted a channel to comment on the issue. The EU blog was the next best thing.

Just in case; I've prepared a helpful diagram for their legal experts. 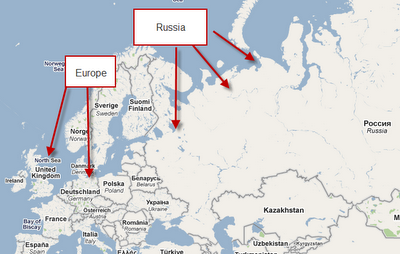 (Update 2: Yes, yes, there are some smart people out there. Russia does have a seat on the Council of Europe - but not the EU, etc.)