Over at TheNextWeb Alex Wilhelm noticed Apple bidding on [windows 7] keywords. It was a good blog post but actually this is just fairly common digital marketing tactics. Kudus to Apple for the attempt. You're not allowed a negative AdWords ad - so they can't slag Microsoft off - but they can encourage a positive view on their own product.

I can't re-create this exactly. I don't think Apple are running this ad in the UK (given that we get our own remakes of Mac vs PC TV ads I suspect we have a different Apple marketing department).

I do, however, get this on a [windows 7 download] search. 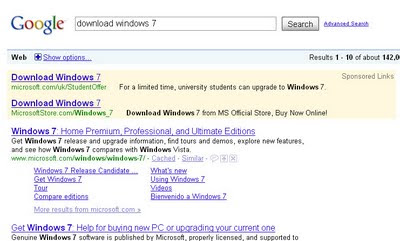 So what's the big deal?

Google has rules for what's an acceptable PPC/AdWords campaign... and this breaks it. Google bans "double serving". That's the same advertiser, using different sites but with a similar purpose, bidding on the same keywords and showing at the same time.

Double serving isn't always black and white. For example, a company which owns a bunch of dating sites could advertise the same sites for the same keywords if the first site was a subscription model targeted towards professionals and the second site was a free to access, targetted to 20-sometimes, with a regional flare and which made heavy use of SMS. Why? They might both be dating sites but the user experience is clearly different.

Microsoft.com and Microsoftstore.com might be different sites but the user experience here is pretty much the same experience. The student offer link (microsoft.com here in the UK) takes me through some targeting options and after telling the site that I'm not a student I end up at a page which looks like this: 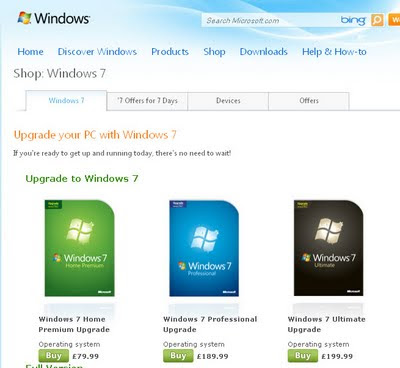 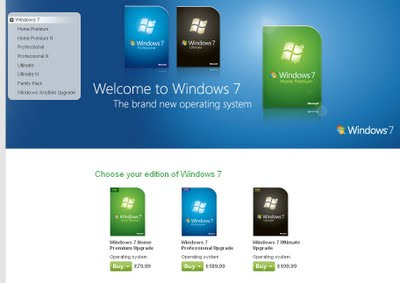 I'm not saying Microsoft are doing anything ethically wrong here. In fact, they and whoever their digital marketing agency are may be unaware of Google's double serving policy (which may cause them problems when/if they have to pick one ad or the other).

This is, however, another example of how awkward the double serving policy is and how Google don't always catch it straight away.
Labels: google microsoft ppc