Google's rules on AdSense are clear. Sites may not include "Violent content, racial intolerance, or advocacy against any individual, group, or organization".

So surely "Is Jade Goody Dead Yet?" breaks that rule? 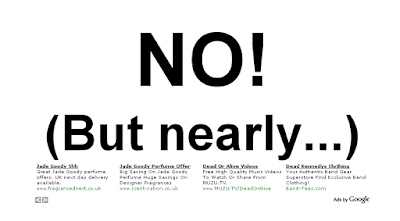 The meta tag content of the site also illustrates the owner's intent.

International readers may not know who Jade Goody is. She rose to fame in the UK by staring on TV reality show 'Big Brother'. She was controversial then.

She then returned to Celebrity Big Brother where she made comments which were widely seen as racist and reduced actress Shilpa Shetty to tears.

If Goody's comments had appeared on a web site then Google's AdSense terms and conditions - which also ban racist comments - would have prevented that site from running the ads.

Jade is now dying. During a 'come back and apology' tour of India it was announced she had terminal cancer. Jade's made the decision to allow as much of her life to be broadcast and her story sold as possible. Why? Her publicist Max Clifford explains that the money is intended for her two children.

Only time will tell whether Google will continue to allow "Is Jade Goody dead yet?" to run AdSense. In the mean time brands run the risk of appearing on the site - I've seen Peta and Joost there.
Labels: adverts adwords branding