I actually like Facebook efforts to bring social ads to their platform. You can see the traditional CPM and CPC ads beating a slow retreat as Facebook works hard to find social/engagement ads to replace them.

However, the challenge with any interactive ad is that people might interact with them - people like me.

I'm harsh when it comes to surveys. If I want a yes/no response then I dislike being forced to put the "maybe" option in - even though people beg for it. Equally, I'm sure the ability Facebook gives for the survey audience to ad their own responses is useless most of the time and harmful some of the time.

For example, I was a shameless troll in this paid-for survey from "Social Ad Tools". Then again; perhaps they knew they were letting people offer their own responses and perhaps this is what they wanted. 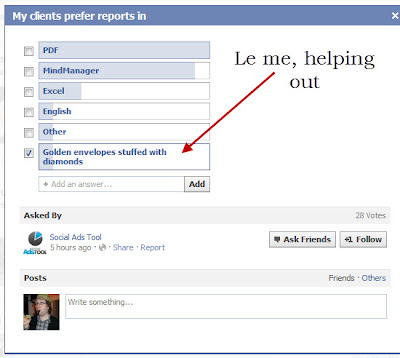