Who has more cash? Google or the US Treasury?

The US is in a bit of a tight spot with their finances and so are many European economies. Think Progress has a fantastic research piece that points out that as of July 13th of this year – Google and the U.S. Treasury were tied for cash reserves.

Barclays Bank has more cash, so does HSBC, Mitsubishi, Lloyds, G.E., The Royal Bank of Scotland, Morgan Stanley, JPMorgan Chase, Deutsche Bank, and the Bank of America. In fact, 29 companies have more cash in the bank than the U.S. Treasury.

The top two are, of course, Chinese.

I suspect some people are using this to reflect on the state of global economics (while they quickly move their dollars to gold). I read this list and was just blown away by the M&A potential. Imagine someone like G.E. stepping forward all of a sudden to make some significant internet purchases or one of the banks deciding they rather liked Square and fancied owning it. 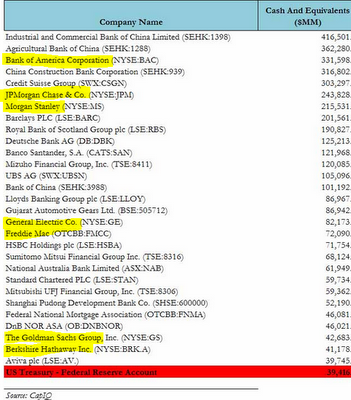