Google+ seems to be dividing opinions. I'm still in favour of it and I'll claim that people who were on the fence, after giving it a go, move to a more favourable position. This is a good sign for the project.

People are saying many things about Google+. I've not heard anyone suggest it's a content play, though. Is it? Not directly but it will certainly influence other people's content plays - as they'll want their content to surface via Google+ and Sparks.

Google+ is certainly a profile play. Even before Google+ launched it was possible to find high visibility profile results in the SERPs. As I found out exactly one month ago.

To illustrate just how quickly Google is moving to include Profile information in its thoughts I used a simple site: search command. Basic SEO from 2002.

Here's what we get. 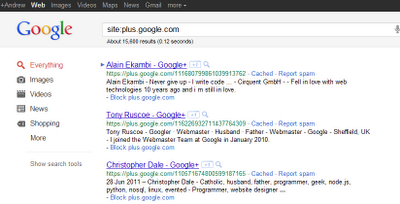 That's right. Google+ has been running for just a few days. You could easily argue that very few sites are linking to plus.google.com profiles and yet there are already 15,000+ URLs indexed.
Labels: google google+