The fall and rise of QR codes

I've noticed a whole batch of QR news in recent weeks. I like the QR format but I suspect that's partly due to Google Goggles being fantastic. I've watched iPhone users struggle when they've come across the first QR code that's caught their attention.

I think it's clear that QR codes won't always work. They'll not always be deployed correctly. Mike Blumenthal has noticed that Google dumped QR codes from the Places Dashboard. Despite quite liking QR codes I never had a reason to use them for Google Places.

Ged Carroll found another clear QR code fail too. This time from CNN. 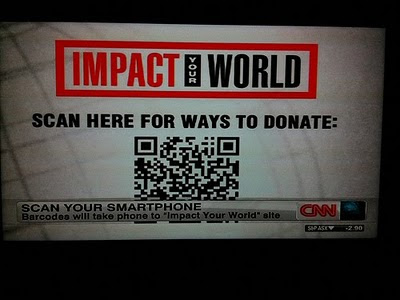 I still think that's progress. Had the news bar not cut across the image then it would have been a fairly effective way to capture an action. Who watches TV with a pen these days? I bet more people would be happy to point their phone at the TV from the comfort of their couch.

Indeed, a photo from my own too-large TV in a a too-small flat shows a TV QR code working (this time the V+ box in the way is my fault). This is part of a Discovery channel break, part of a set, and Google Goggles scans this image quickly, without the need for cropping provides me an easy way to mobile to their site. Despite Carroll's photo of the failed CNN attempt - I do think QR codes are one of the pathways into a multi-screen strategy. 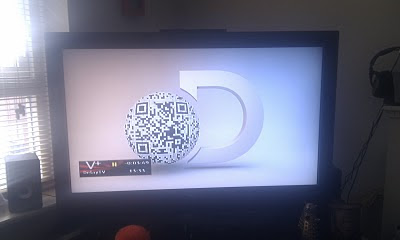 Still on the TV screen, but in a new medium, and we find Richard Gregory encountering QR codes in a boxing game. Glancing at the image he's captured (which is all rights reserved, otherwise I'd post here) suggests to me that Lynx's deployment of the ad works well. It's an advert in the floor of the boxing ring. It's a "looks like real life" makes-sense enhancement to the game. Richard doubts it would work with Call of Duty. I think he's right... but then it's all about finding the right context.

I suspect we'll continue to see QR code wins and QR code fails in the near future. My instinct is that we'll see more wins than failures.

In particular, QR codes seem to mesh well with NFC payment options. You'd point your phone at a QR code, which also happened to be planted above a NFC system, and your phone would walk through a "would you like to buy?" option.

What do you think?
Labels: google mobile mobile nfc qr