Apparently The Sun has a clever article today in which research which suggests that the average UK male spends a year of his life looking at women. I've not read it. In fact, I had to look twice to see where the news came from.

Google passively suggested this article to me. It wasn't in response to a search. It was in response to the fact that a number of people had marked the repeat of the story on The Times of India as "liked" on Google Reader. 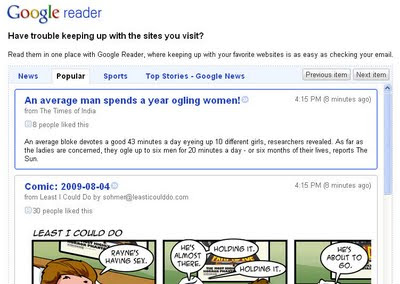 If I was The Sun's mastermind behind that story then I might be annoyed. I might say that The Times of India stole the story from me. I might also be annoyed at my readers. Why didn't 8 of them mark the story as "liked" via their Google Reader?

Questions of readership demographic come up, don't they? I think it's safe to say that the average The Sun reader is a very different sort of reader than the average The Times of India reader.

I think this sort of "crowd selection" will rise in importance throughout this year and in 2010. We already see the Twitter crowd picking stories in a similar way.

I do think that the "like" feature gives news writers the advantage over news repeaters. I'm not going to use terms like "newspapers" and "blogs" as I don't see the difference any more (is an online only newspaper a blog?). There are, however, sites which do very well by being a quick second to important news or by watching Google Hot Trends for suggested topics to write about.

The "like" feature (or similar) provides a way for news writers to present their original version of the story in front of the mass of readers. Once they've done that then there's less reason/reward for the news repeaters to re-write the story.

That's what you want; speed and readers who help propel your version (your original) of the news to the limelight as quickly as possible. We're going to see more and more internet agenda setting from populous countries like India and China.
Labels: social media