I had to rebuild my main laptop - the one I currently use a PC. After a Technorati search through blogs with some authority I found myself on a blog site that managed to fire off a pop-up.

There was something else nasty on that site - an adware/virus that manages to get through FireFox, get through a fully up to date installation of Norton Internet Security. It then disabled Norton, blocked my attempts to access HouseCall and wouldn't budge when I installed AVG from a USB key.

A battle later the laptop would log in to a blue screen of death.

There's always a silver lining though. After the rebuild this old laptop runs much faster and I've piked up a new version of Windows Live Messenger. It has a rather funky "What's new" strip below the contacts screen. This is filed under the 'new to me' label. 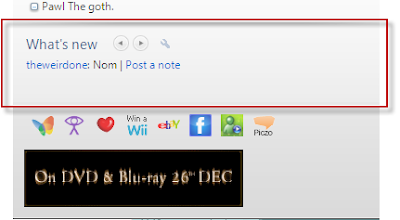 The first thing to do here is to integrate Facebook into this space. This all happens in a slideout window from Windows Live Messenger. 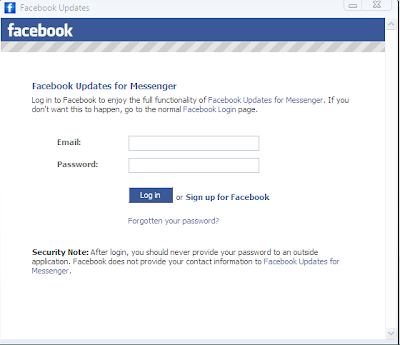 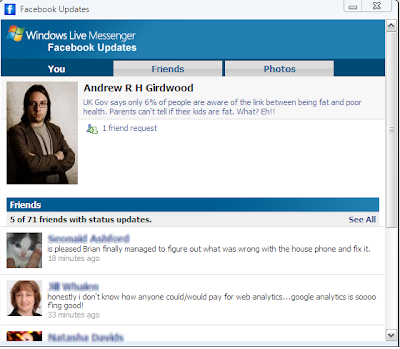 What's even more interesting for me is the addition of some basic Twitter support. My Live profile page now shows off my tweets. 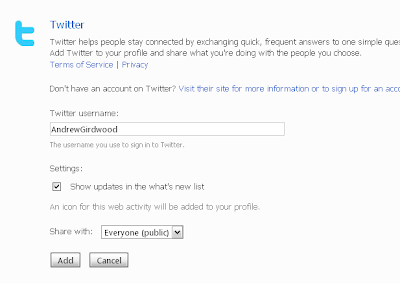 Of course; there are a number of problems.

There different internet social circles I operate in. There are only a few people I accept into my Live/MSN Messenger list. By no means at all would I 'friend' as many people on Messenger as I have done on Facebook.

This system lacks Friendfeed's clever imaginary friends. Unless one of my Live Messenger contacts also decides to add their Twitter, blog RSS, Flickr, etc, profile to their account then I can't use Messenger to stream their activity.

I really do think we're moving towards a cloud computing environment but I also do think one of the applications we'll keep running is an activity stream like Twhirl, AlertThingy and the long awaited native Friendfeed application. It seems to make sense that this application will also be an instant messenger and so we should all watch Yahoo, Google and Microsoft for any horizontal movements here.
Labels: mobile social social media