I understand why SEOs have metrics to act as proxies for PageRank. I don’t always understand attitudes towards them. We’ve no idea how close they are to matching PageRank – essentially they’re an informed guess. SEOs aren’t always consistent either. Over a beer lunch you can generally get an SEO to dismiss PageRank as not a metric to bother with and then get them interested in a sure fire way to earn links from DA 70 sites.

There are other ways to judge websites. A guideline based approach to determine whether or not a blog passes a series of tests or not isn’t any better, or any worse, than the PageRank proxies. It’s just a different way of doing things. 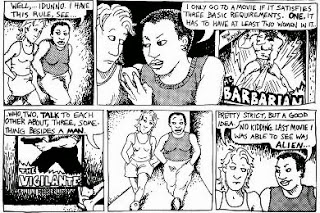 I first started to codify some of these guidelines after discovering the Bechdel Test. This test applies to movies and is simply devastating.

To pass the Bechdel test a movie must have two female characters who talk to each other about something other than men.

How many of your top 5 movies pass the Bechdel test? It was this test that inspired my Colleen/Jac Test. Mine wasn’t named after the woman who created it but after the colleagues who told me about the Bechdel Test and then listened to me share the idea to adapt it for outreach.

Is the Blog Even Legal Test?

Are you confident the blog is disclosing incentived posts well enough? Can you tell at a glance which are sponsored posts or do you suspect there is advertorial content masquerading as editorial.

Why this guideline?
These blogs are all set to be a future problem for you. It could be that Google will tag them and they'll become a source of unnatural links or a regulatory body like the FTC or OFT will get involved. Disaster.

Who tends to fail this guideline?
The failure to disclose is unfortunately widespread. Travel and Mum bloggers have the reputation for responding with "Only if you pay me" to editorial pitches but in reality it happens in all verticals. In many ways agencies and brands have contributed to the problem by facilitating it.

Are there at least two opinion pieces in the last ten posts and do they discuss something other than goods and services.

Why this guideline?
We're looking to check that the blog is more than reviews, reviewbait and similar. The rule also works to sniff out blogs overloaded with sponsored content. The phrase "opinion piece" can be interpreted as you see fit but I tend to rule in recipes and style guides.

Who tends to fail this guideline?
Beauty and travel bloggers often run afoul of Colleen/Jac test and that's often because they're powered exclusively or heavily by company supplied products or travel deals. This guideline isn't a good match for review blogs.

Does the blog often cover news from the subject area it covers within the first hour?

Why this guideline?
We're looking to see if the blogger is close enough to their interest area to be among the first reporters or whether they're simply part of the echo chamber. This rule helps spot influencers and potential influencers.

Who tends to fail this guideline?
Low quality news sites that act as two bit aggregators often fail this test.

When you search for the blog's name/brand does Google respond with a navigational SERP? (If you can't tell; does the site come top?)

Why this guideline?
Are people actually looking for the blog by name? This suggests influence, community and loyalty. All highly desirable.

Who tends to fail this guideline?
Blogs on domains like keyword-news.info and with no other brand of note tend to do badly here. Another common group of blogs that don't do well here are lifestyle, fashion or beauty blogs with branding composed of product names. For example, "Little black keyword" or "Keywords and dreams"

The VP of Pretty Things Test

The Vice President of Pretty Things is a derogatory term for marketers a million miles from the blogging front lines who just don't get it. It may be petty of me to have the term but these are real people, often highly skilled in their area and who will have influence on your projects. To pass the VP of Pretty Things test blogs need to look great, or be written by someone famous or have such traffic stats that even a VP of Pretty Things will concede the site deserves to be included in the campaign.

Why this guideline?
If your outreach successes are not good enough to put on a PowerPoint for a VP of Pretty Things to review then it often is genuine cause for concern.

Who tends to fail this guideline?
Blogs on default templates or too heavy with ads. Blogs that are too far away from a brand's perceived demographic are just as likely to fail.

I'm not suggesting that any of these guidelines will replace metrics that SEOs and their clients like to talk about. Although I wish they were used alongside some of the better metrics.

In particular, if SEOs and clients (or fellow in-house digital folk) agree on their own blog evaluation guidelines before an outreach project begins then that helps both the project and with the evaluation afterwards.
Labels: blogging legal outreach seo