Google has a pretty neat ability to let you restrict your search to translated foreign pages. For example, check out this result for [DNS].

It's not a feature that's used by English language searchers very often but it's used more heavily by power searchers in Europe and the Middle East.

The screen grab below also shows the entire top set of results dominated by Wikipedia. Is someone searching for information about DNS really interested in reading four different versions of UGC content about DNS? Or just one version of Wikipedia (which one?) be listed before an alternative authority is suggested by Google? 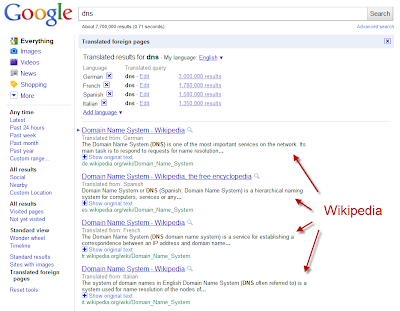