I thought Microsoft had retired the Hotmail brand.

As it turns out; no. Not quite. Wikipedia says;

The Hotmail brand was planned to be phased-out when Microsoft announced that the new mail system would be called Windows Live Mail, but the developers soon backtracked after beta-testers were confused with the name change and preferred the already well-known Hotmail name, and decided on Windows Live Hotmail. After a period of beta testing, it was officially released to new and existing users in the Netherlands on November 9, 2006, as a pilot market. Development of the beta was finished in April 2007, Windows Live Hotmail was released to new registrations on May 7, 2007, as the 260 million MSN Hotmail accounts worldwide gained access to the new system. The old MSN Hotmail interface was accessible only by users who registered before the Windows Live Hotmail release date and had not chosen to update to the new service. The roll-out to all existing users was completed in October 2007.

Now, it looks like, the "Windows Live" part is being dropped. I was in London this week for Internet World and the tube trains all had Hotmail: TheNewBusy ads decorating the poster boxes. 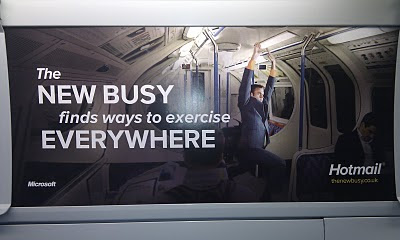 Maybe this is a cheeky call from Microsoft UK but there's no sign of the "Windows Live" logo/brand anywhere.

Hotmail has impressive brand strength. It's so old! It's not had its own domain for years, many years, and yet people still talk about Hotmail. It was such a good buy by Microsoft.

Of course, there is the new busy site from Microsoft. It's part of WindowsLive.co.uk (so, no, not Hotmail.co.uk) ... And yes, this site still talks about Windows Live Hotmail.

From an SEO point of view the new busy site is interesting. What percentage of the site's text, would you say, is not visible to users on loading? Quite a lot. How do you think Google would react to this?

The PPC campaign is also interesting. Once again we see no sign of "Windows Live". It's clearly Hotmail.