Another Sphinn post! Am I obsessed? Shouldn't I be working, watching Harry Potter or having a glass of brandy? Well. Maybe!

Sphinn has me fascinated right now because it was Google clean. If you searched for sphinn or sphunn before launch you'd have found nothing. I think one word searches (ie, just 'sphinn') aren't representative of the average search these days so I've been watching the two word search 'sphinn sphunn'.

I've already noticed how quickly Google picked up on Vanessa Fox and my first posts.

Here's another first. The "Sphinn Me Too" prize is awarded to the first Google SERPs which shows someone asking people to sphinn their post. 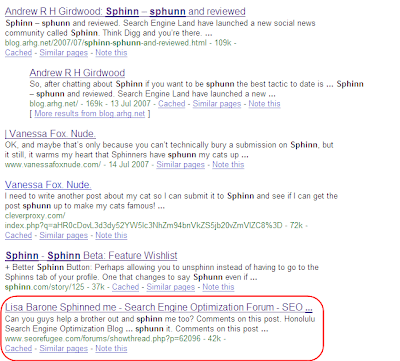 The prize goes to SEO Honolulu and it is won in style.

This is not a sphinn post that SEO Honolulu submitted to sphinn himself but is one that someone else liked and submitted for him. That 'someone else' just happened to be Lisa Barone which explains the proudly titled Lisa Barone sphinned me post at the SEO Refugee forums.

I'm pleased. I think this is one of the best possible reasons to post about one of your articles making Sphinn. It's using Sphinn to help judge the quality of your posts and authority of your readers. It's also, of course, about letting other people know about that success! A less impressive post would have been one which summarises as "I posted article x to Sphinn".

To qualify for the "Sphinn Me Too" prize SEO Honolulu did have to encourage other people to sphinn him.

Does this mean SEOrs are already trying to game the system?

Pop over to SEO Refugee and you'll see that SEO Honolulu does not say "Sphinn me and I'll sphinn you".

SEO Honolulu offers to share details on how much traffic Sphinn might generate but he doesn't ask for any favours in return.

I think the "Sphinn Me Too" prize has been won but it's been won with a good degree of style.

However, it is inevitable that we will see people offering "sphinn me and I'll sphinn you" backroom deals. It will be interesting to see how common it gets, whether the SEO community is as bad as some people claim, whether it becomes a real problem or whether the community polices itself. It will certainly be interesting to see whether Danny Sullivan and co can do a better job at tweaking the rules but keeping the contributors onside than Kevin Rose and Digg have done.
Labels: social media sphinn

Thank you for the kind words, always appreciated. I totally agree with you, I can definitely see people attempting to game the system the same way digg and other social portals get messed with.

For the record, my traffic jumped 5X the normal daily amount within hours of the awesome Lisa submitting my article. Very cool stuff!

p.s. me and you both need to get back to work and stop tinkering at sphinn so much lol
8:24 pm