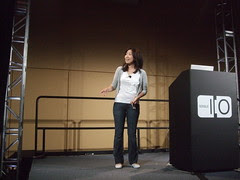 The intro to this Search Engine Strategies panel asks whether SEO might be dead. Some experts think it might be. Others call this BS. The lunch time keynote panel discusses this. It should be lively. We've got Maile Ohye, Senior Developer Programs Engineer at Google, Dan Cohen Global SEO Lead MSN at Microsoft, Julian Sambles, Head of Audience Development at the Telegraph and Lisa Myers the CEO of Verve to discuss this. Dixon Jones of Majestic SEO has the honour of trying to moderate.
The session began with an interesting and important disclaimer; Dan Cohen, the SEO guru from MSN (Microsoft) points out that he and his team has no special insight/unfair advantage on how the Bing algorithm works.

Dixon kicks off by asking the panel what aspects of SEO will be important in 2010. Dan talks about the issues around content freshness and the challenge MSN faces by importing content in from third parties. Content is still king, he says, it will always be the most important thing.
The Telegraph has no such problem; Julian explains that the Telegraph stands for quality content and that they've started to train their journalists to work with social media and search. He talks about Norman Tebbit's new blog on their site and that it's the quality of writing that helps to generate the content.
CEO of Verve, Lisa Myers, says that gaining quality links has become so much harder. Looking ahead to 2010 Lisa notes how important Local and Maps has become.
Maile Ohye encourages the SEOs in the room to dig deep in 2010; it's about all your content and even smartphone apps. She talks about the importance of social media in search for 2010 and a tip-like-question; does your CEO tweet?
The importance of social and search union is not lost of MSN either. Dan explains that MSN actually is starting to look at the keywords in referring URL so their page can be updated with recommendations of related content from Bing. It's about showing the user information relevant to their needs and improving the journey. There are challenges with this approach though; does the keyword "David Beckham" belong to sport or entertainment, for example?
Perhaps sparked by the football mention, Julian talks about the importance of planning for events you know are coming - like the World Cup. This is easier than having to be reactive all of the time.
The Telegraph also look at what people read when they visit the site, so the content can be personalised and the user journey improved.
But could this be a problem for Google? Maile says that is very important that sites show Googlebot the very same content that the 'generic' user would see. Personalisation, done wrongly, could be a problem - Google doesn't say that; that's the implication.
Dixon asks Maile, "Does Google like SEOs?" As you can imagine this generates some titters from the audience. "No sponsorship of SES from Google. Has the money stopped?" he asks.

Maile responds, "SEO is a partnership with Google. SEO are part of the communication with site owners." The Google rep, rather put on the spot by Dixon's question, gives the example of how feedback from SEOs and webmasters was the reason why Google Webmaster Console includes site speed stats.
Julian says, as a publisher, they have good relationships with the search engines. No special attention but a good relationship. The Telegraph delivers good content, SEO'd content that helps drive traffic. This is a symbiotic relationship with Google.

Turning to SEO 101, Dixon asks whether basic concepts like h1 tags are an example of dead SEO.

Dan, MSN's SEO, points out that relevancy is still important. This needs to be verified with a trust factor later; but relevancy still matters.
Lisa thinks these core concepts are still part of but reminds us Google doesn't pay as much attention to h1 tags as they did a few years ago. She gets angry at SEOs who still push outdated concepts like keyword density.

Julian agrees. These tags might be less important but they still have some weight and relevancy still needs to be considered.
Google's Maile chimes in; the barrier to entry on these SEO 101 factors has dropped. You can achieve it with WordPress plugins, for example. That's why SEOs need to try harder to add value these days and why Google is keen to continue to communicate with website owners.

Maile, like MSN's Cohen before her, finds the time to discuss Twitter while talking about the continued importance of Relevancy for SEO. In fact, unlike panels earlier in the day, %100 of the speakers have their own Twitter accounts.

How have things changed? Maile discusses how a lot of Googlers view the web. A few years ago you'd double click on an icon on your desktop to start an application or access the web. These days you can access applications from the web. This creates a big playground of apps. It's not just about mobile apps; it's about web apps. THs is why Google has a huge stake in HTML5. Google are betting on the web. That's why SEOs are part of Google's communication plan. SEOs can help site owners navigate this playground of apps.

"How does Microsoft feel about Google using AP content to create pages?" Dan is asked. Dan points out that Google have also recently appointed a director of ecommerce before passing the question on to the Telegraph's Julian Sambles. Julian describes this as a new challenge but very much part of the nature of the web. Things change and digital marketers have their jobs because of this; they provide the solution to these new challenges.

Another question from the audience talks about the challenges of keeping up with all the changes Google makes to their algorithms - believed to be over 400 a year. The answer, the panel suggests, is to discuss with other SEOs. Many of the panelists use "social media" type techniques to stay abreast of the news. A much harder issue, identified by Dan Cohen, is how to prioritise changes sites should make due to SEO reasons. It's not possible to tell how much money a canonical link resolution, for example, will make - so even MSN struggle to make the business case.

When the audience tries to lure Google onto the subject of paid links Maile Ohye successfully teases back before going on to note that many paid links are easy to spot. Once Google finds one paid link they can often use that point to find more and signals that suggest even more. Google can decide to discount a link if it doesn't look right. They can be fairly atomic with their precision and take action against links or pages before targeting a whole site.

Google insists; having a strong website is very important.