How much are good reviews worth? 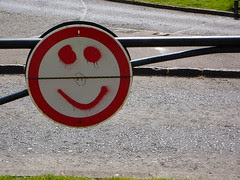 Image by Andrew Girdwood via FlickrIt's been a good month in Search. Not only have Google and Bing confirmed that social media can provide trusted Quality Signals, Google actually took the time to adjust their algorithm so that bad reviews can harm your rankings.

Google's decision to react to bad reviews was a quick one. The algorithm change was also a quick one. Was it a surprisingly quick one?

This is just a theory, so much about SEO blogging is about speculation so please forgive this one. The changes Google made to the algorithm to react to bad reviews were born from the same branch of the algo-tree as the anti-Googlebomb rules.

Just a reminder; googlebombing occurred when lots of blogs got together to manipulate the SERPs for political gain or just for fun. George W Bush's bio once ranked first for miserable failure.

When Google made their announcement of a reduced Googlebomb impact I recall many SEOs didn't believe them. These SEOs thought that Google was lying and the announcement was just to cover up manual manipulation of the results by Google.

Dear me. I like still like to give this example of how badly out of touch some SEOs are with the ethos of the core engineering team at Google.

At the time I suggested (based on a patent application Google had filed) that one way to cope with Googlebombs algorithmically was to look for trusted editorial sources that called out the Googlebomb. For example, the algorithm would notice when Trusted Site A used the phrase "Googlebomb" and then detect the phrase "miserable failure" in relation to it.

To support my theory I pointed out that it tended to be trusted editorial sites that rose to the top of the rankings to replace the Googlebomb target.

It's not hard to see how an extension of this approach could allow Google to detect negative reviews on sites that the algorithm trusted and then modify rankings accordingly.

Equally, it's as easy to imagine that Google is aware of positive reviews and success stories for brands. If Google's accepted that reviews can act as a Quality Signal then its no stretch to suggest that positive reviews might positively effect the search rankings for the site.

A good question is whether there would be enough data on the positive review side for Google to confidently take a decision on. People tend to moan about bad service and stay quietly content when they get good service.

It is just a theory but I would suggest some brands do do well enough with customer service to create enough of a positive buzz online.

First direct, for example, was recommended to me by a co-worker as a bank to trust and I still notice lots of positive buzz about it.

Consumer group Which - easily strong enough to be counted as 'trusted editorial' by Google - awarded first direct first place in a customer survey. That was enough for sites like This Is Money to write about it. You could even point to first direct's own social media newsroom as a way in which positive news can be encouraged to propagate through the web.

From a personal perspective it's certainly welcome to imagine brands competing to offer the best possible service, in order to boost their social and Google results and as a business objective. Surely that would benefit the man on the street?