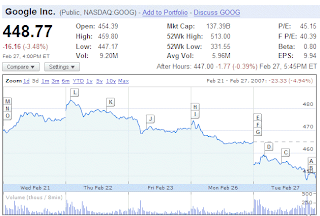 Yahoo's shares have also dropped. As have Microsoft's. 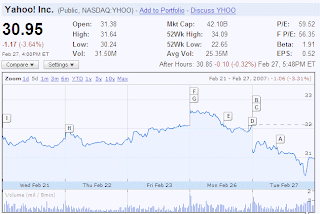 This is not a search engine specific issue though. In America the stockmarkets (the New York Stock Exchange and the Nasdaq) have "corrected violently". Shares across the board have fallen over fears on a slowing (American) economy and investment in China.

I'm using the phrase "corrected violently" because I suspect many people would argue that share prices have been floating high recently. There's been a flurry of mergers and relief that oil prices have been coming back down. Today that reached a tipping point and many bankers decided that there was the danger of over-reaching themselves.

Comparing the search engines in China and the emerging Asian markets is interesting. Microsoft's Live Search really does not yet factor although Hotmail is significant. Google has a fight on their hands. It's Yahoo who tends to do well in Asia. Yahoo's Email is the market leader in many Asian and Australasian markets. We need to factor in email has, increasingly, web-based email systems are used to present a tempting search box to as many people as possible.

In some ways this means Yahoo is more sensitive to changes in Asian markets. However, when American investors begin to worry about how hard it is for American companies to reach China then, I suspect, it'll be Google's market price which suffers.

Notice how well Google is doing at wooing their Western fans with their Chinese office and staff, though? Just today Philipp has a cracking post on Who plays Who in the Google movie. Who plays Who? Hu plays Hu! Google's Chinese President is included - and without a good actor match. See anyone from Google UK there? No? Anyone from Google Europe? Nope. There's a method here. Actually, Google tends to do things which are fun and cool - let's not say "method", let's say "positive side-effect". The positive side-effect here is that Chinese abroad in the States and elsewhere in the West will go home and be more likely to be use Google than before. Students are a common target for marketers. Grab someone's loyalty when they're a student and someone else will have to work hard to shift that loyalty.
Labels: money