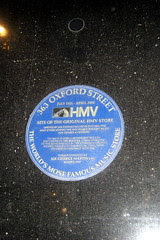 HMVCurzon is an in-store cinema for HMV. The first one, HMVCurzon Wimbledon, is a 263 seat, three screen cinema that’ll open above the HMV store in Wimbledon.

I can see why HMV are doing this and I agree with the tactic. The products that HMV sells – games, DVDs and music – are exactly the sort of thing where the physical medium isn’t import. You download the latest games, DVDs and music these days and you don’t trek all the way to Wimbledon to buy them. You certainly don’t want shiny but fragile spinny discs to cart around the next time you move house or to ruin with grubby fingers.

What HMV are doing here is giving us a reason to visit the store. It’s about turning retail into an experience and therefore giving it a reason to be physical rather than simply virtual. HMV talk about becoming an entertainment hub.

So, HMVCurzon is a physical thing then… but does that mean it should be sloppy online?

The sub-brand does have a website. In fact the site informs me that they have a café/bar and offer internet access. Perfect. It’s jolly hard to find a nice place to sit, have a beer and get online.

What I noticed – after finding out about HMVCuzon – was the lack of affiliate communication.

Now, I’ve subscribed to an HMV affiliate program somewhere. It was only few months ago that I got emails from HMV’s affiliate managers which detailed how HMV was adding DoubleClick tracking to their affiliate redirects. Another good idea as it’ll allow them to de-duplicate sales against search, other networks and even look at sales attribution (or click path analysis as DoubleClick call it).

So unless I’ve silently been kicked off the program (it happens) I should have got an email about HMVCurzon.

There are dozens of entertainment blogs that should be part of the HMV affiliate program. These are the very blogs that would be fantastic social media / brand ambassadors. They could all be happily writing about the launch of HMVCurzon and throwing in their affiliate code/ads for HMV as valid attempts to monetise the news.

HMV have just launched PureHMV; a loyalty program. I’m a member. I had to pay £3 to join but now when I buy music from HMV I’ll collect points. I can spend those points at pure.hmv.com. One of the things I can spend my PureHMV points is ‘purefilm’… in other words HMVCurzon stuff.

So even simple retail affiliates have a reason to promote HMVCurzon; it’s an incentive to go shop at HMV.

It’s not just a lack of communication about HMVCurzon or PureHMV that may have some affiliates arching their eyebrows though. PureHMV is on a separate sub-domain. HMVCurzon has that different website. It’s likely that affiliates may loose out by linking to either one – the tracking code won’t drop the HMV cookie. What HMV should be doing is making it clear which sites affiliates can link to. Even if there’s no commission for PureHMV claims or HMVCurzon tickets their affiliate program should consider letting either be a valid destination for affiliate traffic.